The NCAA Division I and Division III field hockey championship games were held Sunday, and both were won by the same schools that won the very first NCAA championships 33 years earlier.

The University of Connecticut topped Syracuse, 1-0, in College Park, Maryland, to capture their second consecutive national title and fourth overall. In 1981, the Huskies defeated top-seeded Massachusetts, 4-1, to become the first women’s team to win an NCAA Division I championship in any sport.

Also on Sunday, the College of New Jersey earned the school’s 11th NCAA Division III field hockey championship by defeating defending champion Bowdoin, 2-0, in Lexington, Virginia. TCNJ was known as Trenton State College when it collected the 1981 title with a 2-0 win over Franklin & Marshall in Westfield, Massachusetts. 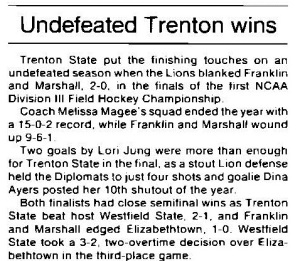 There is no chance of the Division II champion being a repeat of 1981, as Pfeiffer University no longer has a field hockey team. This year’s Division II championship tournament is scheduled to get underway Tuesday, with Westchester, Stonehill, Shippensburg, Millersville, LIU Post and 1981-semifinalist Adelphi all in the running.