Very soon after beginning my research I came across several versions of the same basic story regarding field hockey’s arrival in the United States. The sport was quite popular among men and women in England during the late 19th Century, the story goes, but it wasn’t played at all in the United States until an English woman named Constance Applebee arrived in 1901. Applebee attended the summer session in physical training at Harvard that year, and staged a field hockey demonstration for her fellow students in a courtyard outside the Hemenway Gymnasium. That fall she was invited to six of the Seven Sisters colleges in the northeastern United States to teach field hockey, at which time it took off as a women’s college sport in this country.

Sounds great. But a story of that age could potentially have picked up some inaccuracies over the years, so I thought it would be a good idea to verify as many of the details as I could from contemporary accounts. And, through the magic of the internet, I was able to do most of it from home.

I was able to verify that Constance Mary Katherine Applebee was on the roster of students for the summer session at Harvard that year through the July 13, 1901, issue of the Cambridge Tribune and the 1901 edition of the Harvard University Catalog. While the Tribune had her listed as being from Boston, in the catalog she was listed as being from England. 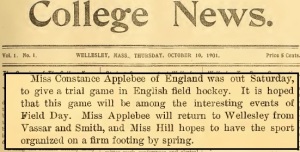 Having placed Applebee at Harvard in the summer, I went looking for evidence of her tour that fall. The earliest reference I found was in the October 10, 1901, issue of the Wellesley College News: “Miss Constance Applebee of England was out Saturday, to give a trial game in English field hockey. It is hoped that this game will be among the interesting events of Field Day. Miss Applebee will return to Wellesley from Vassar and Smith, and Miss Hill hopes to have the sport organized on a firm footing by spring.”

After that, according to the New York Times, she seems to have gone to Vassar: “Basketball and tennis are entirely neglected at Vassar, and English hockey, played on the turf, is absorbing the attention of the students. Miss Constance M. K. Applebee, a graduate of the British College of Physical Education, has been at the college during the week to give lesson in the game, and every afternoon has seen a crowd of girls in gymnasium suits rushing over the field, wildly hitting with curved sticks at something hidden in the grass. Vassar is the first woman’s college in the United States to take up the game, though Miss Applebee is to instruct Smith College next week.” 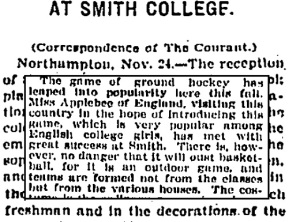 She did make it to Smith College sometime that fall, according to the Hartford Courant: “The game of ground hockey has leaped into popularity here this fall. Miss Applebee of England, visiting this country in the hope of introducing this game, which is very popular among English college girls, has met with great success at Smith. There is, however, no danger that it will oust basketball, for it is an outdoor game, and teams are formed not from the classes but from various houses.”

According to the October 25, 1901, issue of The Fortnightly Philistine, a literary magazine at Bryn Mawr College, she visited Pennsylvania that month as well: “Miss Applebee, the English hockey teacher, was in Bryn Mawr from October 21 to October 25 to teach the game. She delivered an address in the chapel on Thursday evening, October 24, on ‘Hockey in England.’ ” 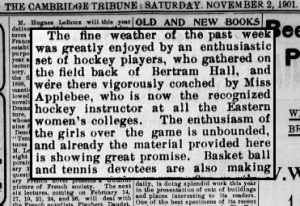 Soon after, she returned to Cambridge to coach at Radcliffe: “The fine weather of the past week was greatly enjoyed by an enthusiastic set of hockey players, who gathered on the field back of Bertram Hall, and were there vigorously coached by Miss Applebee, who is now the recognized hockey instructor at all the Eastern women’s colleges. The enthusiasm of the girls over the game is unbounded, and already the material provided here is showing great promise.”

So far, though it has often been mentioned as one of the colleges she visited that fall, I have been unable to come up with proof of a visit to Mount Holyoke. And the idea that field hockey was not played at all in the U.S up to that point turns out to be a slight exaggeration, but that’s a topic for another time.

The bones of the story checked out, which was satisfying. But there’s a lot of meat yet to come.